Georgian-French relations in the context of European integration 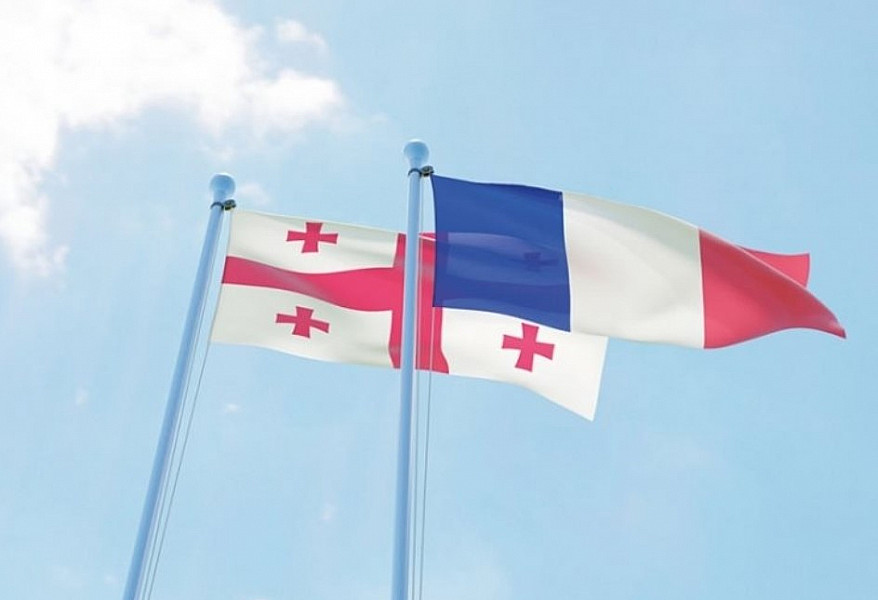 Georgia and the Republic of France historically maintain close and friendly ties with each other both in bilateral and multilateral formats. This was confirmed by the Declaration on launching „Dimitri Amilakhvari Georgian-French Dialogue“ signed by the Presidents of the two countries in February 2019, thus advancing the bilateral cooperation to a qualitatively new level. France strongly supports the sovereignty and territorial integrity of Georgia, a peaceful resolution of the Russian-Georgian conflict in order to ensure the fulfillment of „The 12 August 2008 Ceasefire Agreement“ signed by Georgia-Russia through the assistance and mediation of France, the then Presidency of the European Union. Furthermore, France supports the European and Euro-Atlantic aspirations of the Georgian people and, like other EU member states, recognizes Georgia as a leader among the „Eastern Partnership“ countries and considers it a reliable partner in the region. For its part, within the European and Euro-Atlantic integration, Georgia views France, along with Germany, as a strategic partner and aims to further consolidate France's support for Georgia.[1]

Georgia's consistent reforms and a very clear European foreign policy, primarily based on a civilized choice of the Georgian people, during the ten-year period of the „Eastern Partnership“ have posed Georgia as an exemplary country on the path to European integration. Despite the significant progress made by Georgia, today, the EU, especially the French Republic, does not show not only a clear position regarding the prospect of the „Eastern Partnership“ states joining the EU but also on launching differentiated cooperation with the countries.///Historically, France has always favored those EU member countries that supported the strengthening of the Southern rather than the Eastern dimension of the Europe while setting their „European Neighborhood Policy“ priorities. This was the reason why France, together with the EU member states of southern Europe, supported a partnership with the Mediterranean countries in 2008, whereas the „Eastern Partnership“ project was initiated by Poland and Sweden in 2009.///Within the „Eastern Partnership“, France is committed to stabilizing and peacemaking in the EU's eastern region, and for Georgia, it is important to ensure France's support, as the EU's leading country, to achieve the recognition of Georgia's EU membership prospects. However, as France today aspires to further strengthen the EU rather than enlarge it, the above matter is not on its agenda. Moreover, France opposes the start of EU accession talks with Northern Macedonia and Albania, despite the fact that these countries have been on the path to European integration for more than 20 years. President Macron explained that his position was due to the challenges at the French-European level: „Before starting membership talks on the EU enlargement, let's think about the internal reform of the EU itself“; [...] „How would you expect me to explain to my fellow citizens that the second country from which the largest number of migrants arrive in France to seek political asylum is Albania? “[2]

The latter is particularly problematic for Georgia as it is the third country with the number of asylum seekers in France.[3] Here should be noted the excellent cooperation between the governments of Georgia and France in preventing illegal migration, within which the number of asylum seekers arriving from Georgia in France in May-November 2019 decreased by 50%.[4] Nevertheless, until the problem is finally resolved, it is naturally unlikely that France will recognize the prospect of Georgia's accession to the EU. Today, immigration is considered one of the most pressing issues by French people, and Marine Le Pen, who supports the anti-immigrant policy, is perceived as Macron's main rival in the presidential election in 2022, according to various polls[5]. Therefore, Emmanuel Macron will likely find it more important to share the opinion of his own electorate and make politically profitable moves in contrast with his main competitor, Marine Le Pen, rather than care about the enlargement of the EU.

In view of the above, Georgia should continue and enhance the cooperation with France to prevent illegal migration to the country; furthermore, diversify its representation in France, including by opening consular offices in respective problematic regions and increasing the awareness of Georgian citizens of both visa liberalization and French immigration policy.

Along with eliminating the problem of illegal migration, in order to recognize the prospect of Georgia's accession to the European Union by France, it is also important to differentiate political communication in the context of European and Euro-Atlantic aspirations.

Nowadays, the North Atlantic Treaty Organization (NATO) is not at all political „Coup de Coeur“ [6]for France. Moreover, as President Macron noted, the NATO is suffering a „brain death“[7] and proposed to create a Common European Army. Given the attitude of France to the NATO, the current US president being skeptical of the EU project and that only 22 of the 28 EU member states today are members of the NATO, Georgia should probably consider whether it would be more reasonable to separate the country's European and Euro-Atlantic aspirations and differentiate the political communication on the issue with the French side and not only with them. The separation of European and Euro-Atlantic aspirations even institutionally, at the level of NATO and EU information center, will further stress the importance of European values. In addition to the informational purpose, the center, in the context of the European Union, should be assigned the function of the „House of Europe“ as they have in the EU Member States.///Furthermore, for ensuring the recognition of Georgia's EU membership prospects and creating a more legitimate basis at the political level, it is necessary to raise awareness of the French people about Georgia, as a European country. Today, only 32% of the French population is ready for the EU enlargement.[8] In France, apart from the factor of Georgian President Salome Zourabichvili, Georgia is still mostly perceived as a post-Soviet country, a war-torn country or cradle of wine and a growing tourist destination. Unfortunately, the French have scant information about reforms implemented by Georgia, ancient Georgian culture or the huge investment potential that our country is distinguished by on the intersection of the two continents. Consequently, on the one hand, it is important to continue promoting the positive touristic image that Georgia has in the French press today, since the most positive outcome of the European Union for the French is freedom of movement for people in the EU,[9] and on the other hand, it is important to conduct in France an active coordinated information campaign on Georgia, as a European country, through the „Houses of Europe“, „Europe Direct Information Centres“ or local governments in the regions. Most French people believe that it is primarily local authorities and citizens who play a crucial role in the country's democratic system.[10]

In addition to the above, interpersonal contacts and academic relationships should be further developed. The most concrete #1 benefit of the EU for the French people is the student exchange program „Erasmus“.[11] Thanks to this attitude of the French people, France initiated the European annual celebration „Erasmus Days“ three years ago, which today is celebrated not only in the EU but worldwide as a celebration of European citizenship. Despite ranking among the top 10 Erasmus partner countries, Georgia does not[12] actively participate in the celebration. Therefore, in terms of sharing European values, it will be important for the country to take an active part in the event in the future. Moreover, Georgia should develop relations with France, as the most mobile country within the EU educational programs, in order to become more involved in European exchange or research programs. As Ilia Chavchavadze noted – „The youth should be trained diligently with profound knowledge, and should, as much as possible, thoroughly study European science, be led by European experience, and with this weapon and rifle embark on our country's endeavors. We can't show to our adolescents a better subject, a better way already tested and employed elsewhere. We must keep this subject and way before our eyes“.

For its part, France, the founder of the European project that has always regarded the European Union as a political project, should help to define a clear ultimate goal of the „Eastern Partnership“ at the EU level and start differentiated approach with the member states of the format. The confidence in Europe at the international level is primarily driven by the consistency of its neighborhood policy. Based on the European Neighborhood Policy's principle – „More for More“, the progress made by Georgia and other „Eastern Partnership“ countries over the past 10 years needs to be supported with a new impetus given the quality of their democracy and European aspirations. The differentiated approach to member states is not actually a new thing for the EU, as evidenced by the Euro Zone and the Schengen Area to which 28 EU member states are not members of. Consequently, in today's world, where diverging interests of China, Turkey, Russia and the United States are increasingly evident, it is important to continue the dynamics of EU enlargement to grant the EU, a leading geopolitical player, a more solid political weight. Besides, historically, the ultimate goal of establishing this European project was „The coming together of the nations of Europe“ - which was laid down by exactly the French nation as the basis for this project in the form of Robert Schuman's 1950 declaration.[13]

[3] Statistics of the French Office for the Protection of Refugees and Stateless Persons (OFPRA) on asylum seekers in France : https://www.ofpra.gouv.fr/fr/l-ofpra/actualites/les-donnees-de-l-asile-a-l-ofpra-en

[5] ELABE research on the First Half of Emmanuel Macron's Presidency : https://www.slideshare.net/contactElabe/elabe-pour-bfmtv-mi-mandat-demmanuel-macron?ref=https://elabe.fr/mi-mandat-macron/

[6] "Coup de Coeur" - a French expression applied to describe a strong interest or attraction to a subject or a person.

[7] An interview of Emmanuel Macron with The Economist : https://www.economist.com/europe/2019/11/07/emmanuel-macron-warns-europe-nato-is-becoming-brain-dead

Human Rights for Everyone and Everywhere

Author:
9 Dec 2020
December 10, 2020, International Human Rights Day. This is its 72nd anniversary and global society still agrees to create a world in which “human beings shall enjoy freedom of speech and belief and freedom from fear”, as noted in the Universal Declaration of Human Right...
Read more

President-elect Joe Biden and the EU: Waves on both sides of the Atlantic are now blue

Author:
25 Nov 2020
"Health, climate change, digital, reform of the multilateral rules-based system - Europe takes the initiative and offers a new positive agenda with the US. We should provide a joint leadership and address today’s global challenges,” believes the European Commission Pres...
Read more

Author:
5 Aug 2020
The new coronavirus pandemic is unprecedented not only quantitatively, by the scale of its geographical distribution, but also qualitatively: its impact on our world is multidimensional, encompassing public health, humanitarian, economic and geopolitical spheres. Its un...
Read more